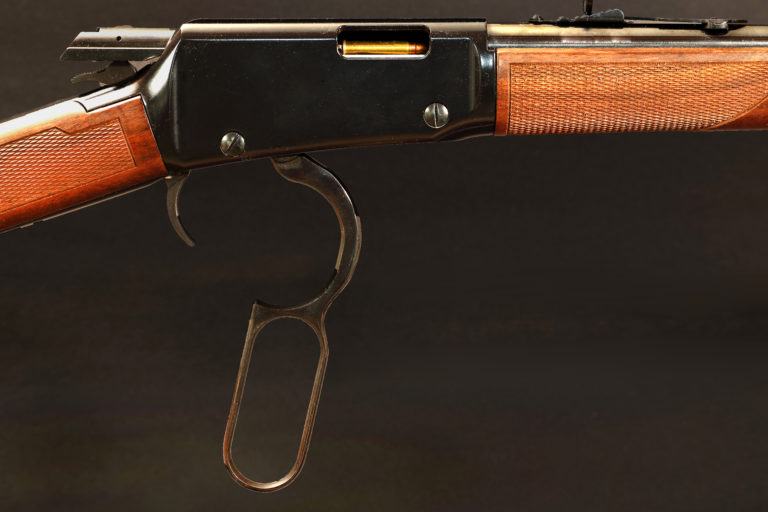 This Marlin 30-30 is the first and only lever-action rifle I have owned. My dad gave it to me when I was 13 years old. It was my second year of deer hunting, and since I had managed to bag a deer with the single-shot 20 gauge the year before, my dad decided I was ready for a real gun. I shot four times, if you can imagine it. One of them hit, though, and I bagged my first buck—a spike. It was good shot, too, right in the lungs. He was dead within minutes. The next deer I shot was a doe with my 30-30, this one here.

I have been using this gun for 15 years now, and it is still in great shape as you can see from the pictures. I don’t know if it’s just my gun, but these puppies are heavy. I got my first 30-06 this year and that thing is way lighter than this. I think it’s the weight of this gun that appeals to me. Its projectile will plow through brush, whereas it seems the 30-06 can be deflected by the tiniest things, like a leaf for example. But they are both tools, both with an intended purpose, and both must be clean in order to perform properly, so let’s get to it.

Steps to Cleaning a Lever-Action Rifle The jag kit plus the regular cleaning kit. Not all cleaning kits come with a jag kit, but they are sold separately for around 13 dollars. The jag is far superior to other methods of removing solvent and loosened fouling. Just make sure to use the proper caliber/gauge. And always keep your tools clean. Hoppe’s 9 Bench Rest Copper Solvent is specifically formulated to remove stuck-on copper from rifle barrels. Copper may come from the jackets of bullets. The copper solvent also removes lead and fouling. You can find Hoppe’s Bench Rest No. 9 from Amazon. A bore snake is one possible solution to someone who either cannot or does not want to remove the bolt and or lever. Just drop the weighted string down the barrel and pull it through. Always run the bore snake away from the receiver to keep filth from getting in it.