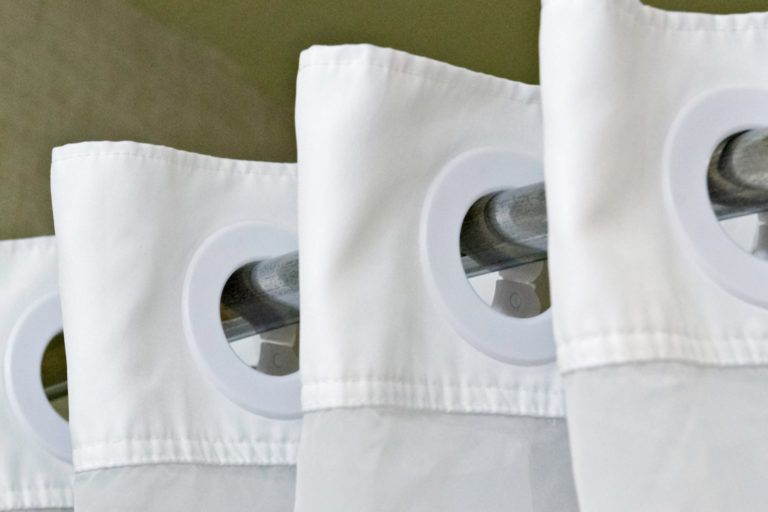 So your vinyl shower curtain has hit puberty, and it’s sprouting hair. Or maybe that’s not hair, but soap scum, mold, mildew, and who knows what. Maybe you’re reading this because you have guests coming for a visit, and you don’t want them to be grossed out when faced with your nasty shower curtain. Or maybe you’ve just hit your mold threshold.

How to Clean a Vinyl Shower Curtain

Shopping for a New Shower Curtain

If it’s obvious that your shower curtain is too far gone and you have to buy a new one, there’s a thing or two you should know before heading to the store. The Center for Health, Environment & Justice, a national environmental organization, conducted a study published in June 2008 that looked into that new shower curtain smell you might be familiar with. They found that vinyl shower curtains made with PVC (polyvinyl chloride) release harmful chemicals into the air. According to the report, these chemicals potentially pose serious health risks. However, there are vinyl substitutes for PVC. And apparently it’s not “vinyl” so much as the chlorine molecule in PVC that causes the greater health risk.

If you’re going to purchase a plastic shower curtain, you should probably buy one that’s chlorine free. So, instead of PVC (polyvinyl chloride), which can show up on labels simply as vinyl, you want EVA (ethylene vinyl acetate) or PEVA (polyethylene vinyl acetate), both of which are chlorine-free vinyl. That’s what I’m going with until the next study is completed because I’m a big fan of transparent or semitransparent vinyl curtains. I don’t mind tight spaces or being wet or being naked, but I have a hard time with all three at once. I think it might also be that I like to see what’s going on in the rest of the bathroom. Or maybe I shouldn’t have been allowed to watch Psycho when I was kid. If you’re running low on elbow grease, you can also clean your shower curtain in the washing machine. This will cause wrinkles, so if that’s a concern, you might prefer to clean the shower curtain by hand. For this method, place the shower curtain in the washer with a towel and wash it using equal parts detergent and baking soda. You can put a cup of vinegar in the rinse cycle and stop it before the spin to cut back on the amount of wrinkling that will occur. Or you can wait till after you’ve removed it from the washer and rehung it to spritz it with vinegar. However you do it, enjoy your clean shower curtain. You can always get Baking Soda from Amazon.