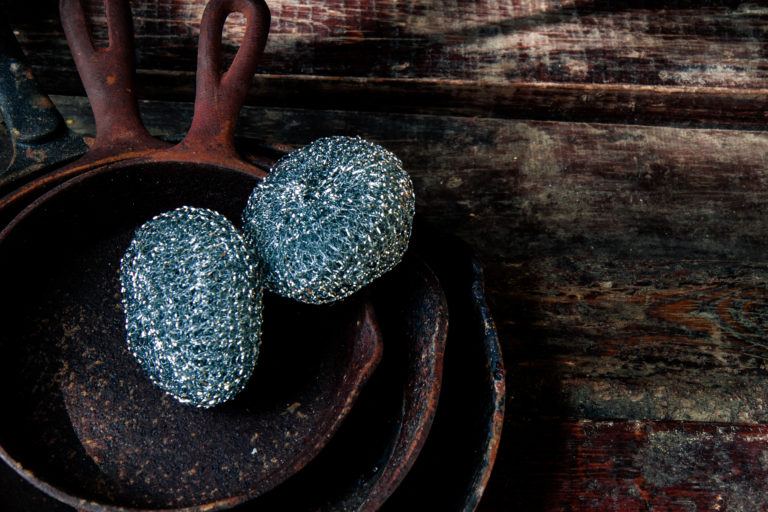 Rust is like a supervillain of stains. It’s ugly, it often seems to appear out of thin air, and it’s tough. In fact, it’s one of the few stains that can’t, in a pinch, be erased with chlorine bleach. Get this: chlorine bleach actually makes rust stains worse. Of course, if you’re like us here at How to Clean Things, you avoid using bleach anyway, so this is one of those times when being considerate of the environment pays off immediately.

Before you start having nightmares about rust stains, let’s slow down and think about this rationally. Everyone knows a supervillain always has a fatal weakness, and rust actually has a few that are natural and nontoxic. Which one you’ll try depends on the kind of material you need to clean, whether the surface is (or can be made) horizontal, and whether it can be kept dry for the duration of the cleaning. Since the worst rust stain in my life was on a vertical portion of my bathroom sink, I chose to use the simplest and most reliable method of cleaning rust off of hard surfaces. If your needs are different, check out the sidebar or scroll to the bottom of the page, where I describe a method for getting rust stains out of fabrics.

How to Remove Rust from Fabric

Acids dissolve rust, so most products designed to remove rust are acidic. Unfortunately, acids sometimes also dissolve other things. Things you don’t want dissolved. Like fabric. So if you leaned up against a rusty railing in your favorite shirt, your best bet is a gently acidic solution of lemon juice and salt. Even still, exercise caution: don’t use this on delicate fabrics, and spot test the method on a hidden section of the fabric to make sure it won’t discolor or otherwise damage it.

If you decide it’s safe to proceed, set the fabric out flat on a clean surface like a counter or the top of a washer or dryer. Cover the rust stain with a small pile of table salt, then squeeze lemon juice over it until it’s soaked through but not too liquidy. To ensure you get the right consistency, you could put a little lemon juice in a bowl and add salt until you have a paste, which you can then spread on the stain. However you get the lemon juice and salt on the stain, make sure it sits there for at least half an hour before you rinse it out with cool water. If the lemon juice and salt haven’t done their job by then, just apply a fresh mixture and let it sit for up to several hours. This method works on hard surfaces, too, but only if they’re oriented horizontally and will stay dry. I tried it in the basin of my bathroom sink, but a drippy faucet washed away the salt and lemon juice paste while I waited for it to work. Rusterizer is an organic, biodegradable liquid rust cleaner that is safe to use on almost any surface, including fabric. It can also be used to remove calcium and lime deposits. You can find it on Amazon. Rust Bomb, another nontoxic and biodegradable rust remover, is a gel that can easily be used on either horizontal or vertical surfaces. Rusteco is manufactured from plant-based and food grade ingredients to ensure that it is safe for both people and the environment. It’s available in both liquid and gel forms to suit your needs, and contains a rust inhibitor to protect surfaces from future stains.