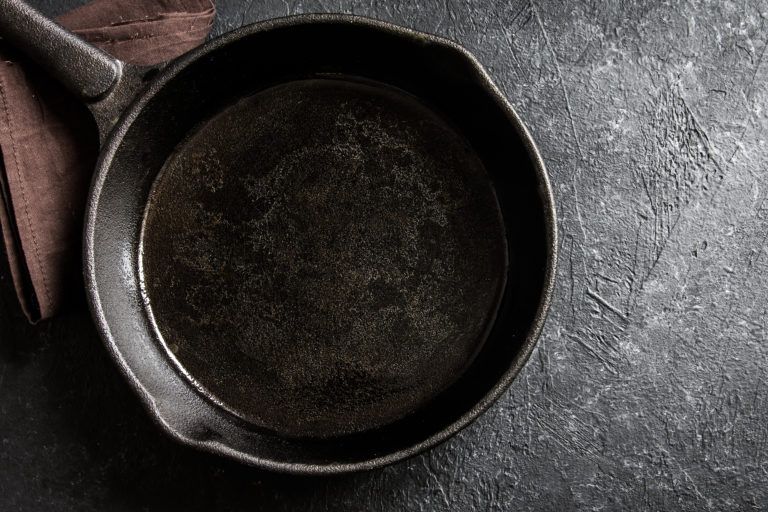 No kitchen instrument or style of cookware has quite the same vocal, enthusiastic community as cast iron. They write books about cast iron. They write love letters to cast iron. They sing the praises of the metal with a religious fervor, and they want to convert you. Since you’ve come here to learn how to clean cast iron, you’re probably, like me, already a disciple. After a week of talking to cast iron users and visiting their online communities, I’m convinced there must be some positive correlation between cooking with cast iron and becoming wholesome and kind. Is it in the food? Perhaps.

“No matter what you’re cooking, the food just tastes better with cast iron,” one fanatic told me. Indeed, cast iron does have some unique properties. It can withstand extreme heat, making it ideal for frying and sautéing. It also distributes heat with perfect uniformity, preventing hotspots and burns. This also helps for making crusts and baking in the oven. Because of its seasoning, cast iron is also non-stick. What is seasoning, you ask? Cast iron is porous, and these pores are sealed with cooking oils. Not only does this create the non-stick surface and prevent rust, it adds flavor and verve to your food. So, each time you cook you’re adding character to that skillet. Ok, so how do you clean this wondrous metal? Well, cleaning cast iron is different. The dishwasher is out of the question. Soap is frowned upon. Don’t be alarmed: the heat of cast iron cookware will kill any germs. Read below to learn how to clean cast iron – a versatile metal, well-suited for both professional kitchens and campfires.

How to Care for and Clean Cast Iron

More Ways to Care for and Clean Cast Iron Cast Iron Cooking For Dummies. Even if you don’t consider yourself a dummy (most dummies don’t) this is a must for the novice cast iron cook. It will show you how to clean cast iron and care for it (like you need that now), as well as what to look for before purchasing cast iron cookware. The recipes cover a wide range of foods for both indoor and outdoor cooking. It’s also a very inexpensive book. You can buy this book from Amazon.

The Cast Iron Skillet Cookbook: Recipes for the Best Pan in Your Kitchen. This cookbook doesn’t actually focus entirely on that cast iron icon – the skillet. It boats over 90 recipes for your stove, oven, and outdoor Dutch oven cooking. It has gotten good reviews from several culinary websites. One complaint (not mine) is that it favors comfort food over gourmet cooking. Cast Iron Cooking: 50 Gourmet-Quality Dishes from Entrees to Desserts. Cast iron isn’t just for campfires and bulking up for no reason. This book demonstrates just how versatile cast iron is, as you’ll learn how to cook healthy gourmet entrees, desserts, and side dishes. For beginners, there is a chapter on different styles of cast iron cookware and what they are used for. There is also a chapter on live-fire and charcoal cooking for those classic recipes.