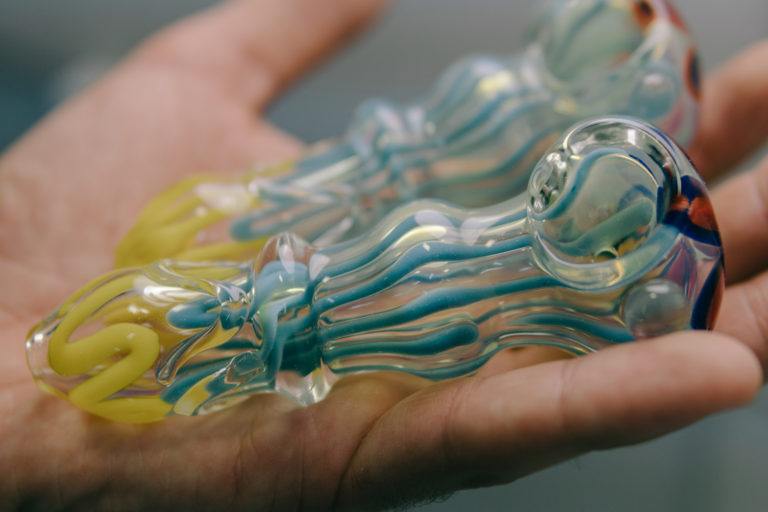 Before I teach you how to clean a bowl, I must insist that this page is only for those, like me, who use marijuana for medicinal purposes. If you’re just getting high to relax or to enjoy yourself, well, then take your debauched self elsewhere. This page is a medical resource for those who require medical help. For instance, yesterday I stubbed my toe getting out of bed. Did I reach for an aspirin? No. I prefer herbal treatments. I loaded up my glass bowl with weed and took my medicine. A little while later I noticed that my lips were chapped. To ease my suffering, I again retrieved my bowl, loaded it to the brim with marijuana (they were really chapped), and smoked it hard.

Later that night, I accidentally ate half a pizza and four Swiss Rolls. I felt uncomfortably full, so I again broke out the bowl and smoked while my wife inserted a nugget directly into my anus as a marijuana suppository. I didn’t really enjoy it though. My bowl was caked with marijuana resin, so my medicine didn’t taste good, and I don’t stand for that. When I was a kid, I only consumed cold medicine that tasted like cherries. Today, I only smoke pot from a clean bowl for the pure taste. If you too have paper cuts, nose bleeds, bizarre bowel movements (suppository induced?), boredom, or other serious conditions, then continue on to learn how to clean a bowl.

Steps to Clean a Bowl

The End of Marijuana Prohibition

Marijuana law reform is no longer a joke; all people who care about this issue can sense that the momentum has shifted. Marijuana has never been as mainstream as it is today. Film, television, art, clothing – marijuana and its iconic leaf are everywhere. Some politicians are opening the issue up for debate. Make no mistake; our elected officials are normally the most cowardly, spineless creatures on earth. That they’re willing to use the “M” word at all is a sign that the taboo has faded. Even mainstream media outlets seem willing to dispel the old myths and make the truth plain: marijuana is far less dangerous than alcohol and cigarettes; marijuana prohibition is a miserable failure that has hurt our nation in untold ways.

So what do we do with this momentum? How can we turn this shift into a sea change and the end of prohibition? Write to your state representatives. When you’re finished, write to them again. Join groups like Norml (The National Organization for the Reform of Marijuana Laws). You can start a chapter in your area. Get active. All reliable studies indicate that Americans, by a strong majority, want to legalize marijuana outright. Can politicians and those who profit from incarceration stem this wave? Don’t let that happen.

Other Ways to Clean a Bowl Efferdent. Many marijuana enthusiasts are recommending Efferdent and similar products to clean a bowl. All you do is plop your bowl in the solution at night and it will be clean by morning. What a boon for the old and toothless. That ho-hum denture cleaner just became a dynamic product. Regardless, you can order Efferdent from Amazon if you’re…incapacitated. Boiling. Many people don’t want to use rubbing alcohol because they believe it stays in the pipe (not if you rinse well) and that it hurts the environment. Well, you can just boil your bowl. I would use vinegar instead of water, and add a few teaspoons of salt. You’ll want to keep the boil under control – violent bubbles (oxymoron?) can cause cracks and breaks. Also, keep that vent on high and windows open…the stench is quite profound. Crystal Energies.After I’ve summoned my spirit animal (three-toed tree sloth…lazy and up high all the time), I place three crystals before my bowl. I then strip down to my underwear and bring them low, revealing my butt crack. I close my eyes and hum in D major. The marijuana resin then forms a ball, which my spirit animal takes back to Nirvana so he can get wasted. Prayer. What would Jesus do? Would he clean my bong if I asked him to? With his genetics, it wouldn’t strain him or keep him long from more important duties. Oddly, this bowl cleaning method hasn’t worked yet. I’ve tried just asking, but I’ve also tried bargaining – promising to devote my life to this or that or make such and such a sacrifice. If Jesus doesn’t pony up soon, I’m moving on to Zeus and his Greek kin. At least they knew how to party.